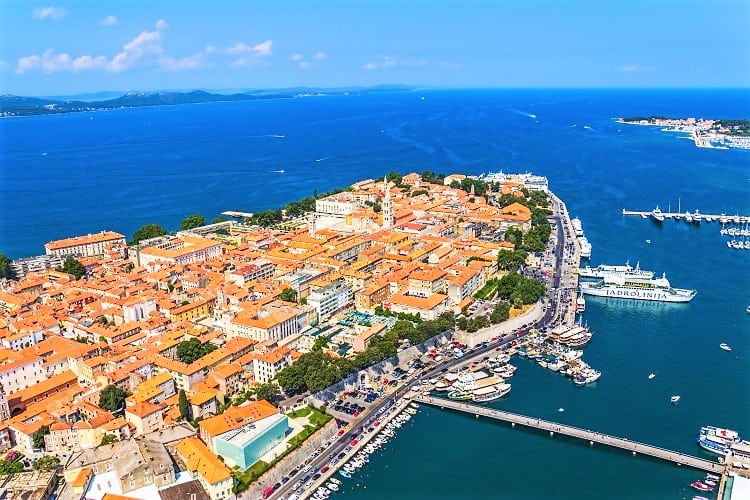 Zadar is a historic port on the Dalmation coast of the Adriatic Sea. This lesser-known city is less-crowded compared to more famous Croatian destinations such as Dubrovnik.

Zadar has a long, rich history dating back to Roman times. While its landscapes are incomparably beautiful.

The best way to see Zadar and the Dalmation Coast is by boat. There are numerous tiny islands along the coast that are unreachable without a boat. Yachts, sailboats, and motorboats are all readily available for charter. 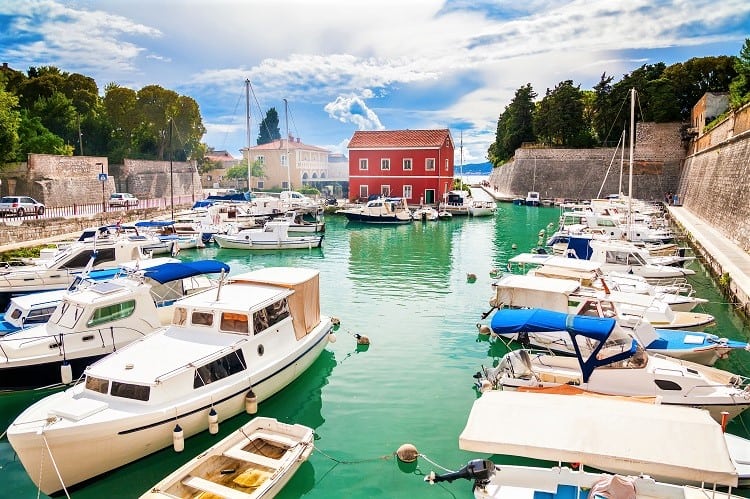 The calm waters of the Adriatic sea make it perfect to rent a boat in Zadar and sail across this beautiful region.

As tourists flock to Dubrovnik due to its famous fortification used in the popular television show Game of Thrones, Zadar is among the best cities to travel by boat. Here’s why:

Best Things to see in Zadar with a Boat

Check out the why Zadar is among the best cities to travel by boat to here:

Beachgoers flock to the southern portion of Croatia’s Dalmatian coast during the summer months. Steer your boat north past the crowds to Zadar.

You can head inland to wander along the ancient, marble streets or stay on the boat and explore the surrounding islands of the archipelago.

Aside from the remote islands and stunning architecture, the sunsets in Zadar are another reason to visit the region. The famed director Alfred Hitchcock once stated that “The sunset of Zadar is the world’s most beautiful.” 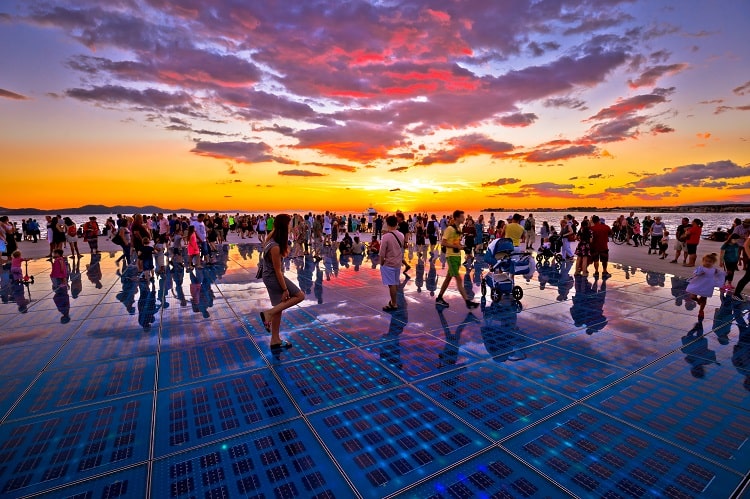 While the waterfront Hotel Zagreb where Hitchcock viewed the sunset is closed now, chartering a boat gives you a front and centre view of the astounding sunsets every night.

3. Listen to the Famed Sea Organ

For an ancient city, Zadar has a surprising amount of modern art installations. One of which is the Sea Organ, underground pipes installed beneath the waterfront promenade that play musical notes when water fills the pipes. 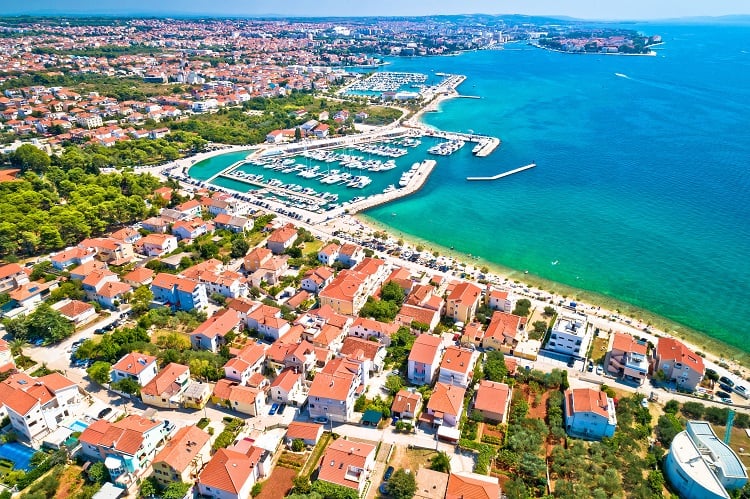 Some say it sounds like the sea is playing the harmonica; others say an organ.

The Monument to the Sun is another popular art installation along the waterfront. The circular solar-panelled plates beneath the stone walkway light up at night. Each circle represents the Sun or one of the other planets.

Croatia is home to some of the best beaches in Europe. Sail from Zadar to the idyllic Sakarun beach on Dugi Otok island. Pristine turquoise water surrounded by white-pebbled beach, a rarity in Croatia.

You will find the peak periods of travel are in July and August but is less crowded in the rest of the year.

Many of the beaches can be reached via chartered boat. Some of the islands are remote, leaving you the entire beach all to yourself.

Zadar’s Old Town is a mix of historical and modern architecture. Some of the architecture to be discovered are columns, towers, and gates that date back to the Roman era.

Zadar boasts proximity to three national parks – Paklenica, Plitvice Lakes, and Krka. Take a break from the sea by hiking mountains and swimming in the beautiful waterfalls.

6. Explore the Nearby Islands

Spending your days floating on the Adriatic Sea sounds like a dream, but there is so much to explore. The Zadar region has 80 surrounding islands you can sail to. 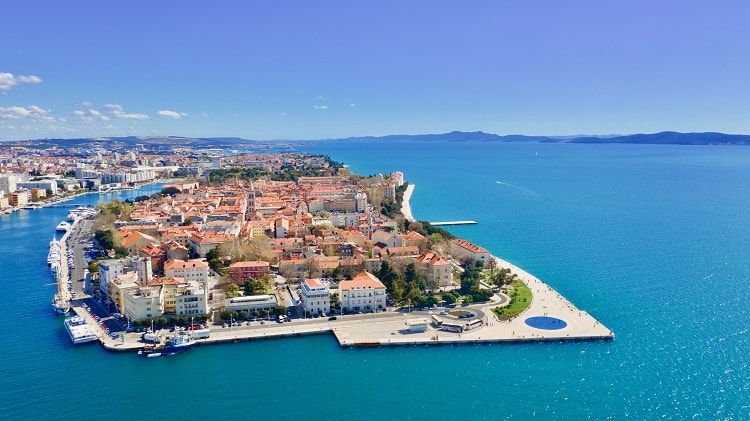 Many people prefer to rent boats for at least a week to see islands such as the Kornati Islands, Dugi Otok, Zlarin, or Murter Islands. Many islands have coves and bays with anchorage for sightseeing. Others are uninhibited and require permission to visit.

Visiting Zadar allows you to bask in the tranquility of the Adriatic Sea, swim in its warm waters and take pit stops as you drift along the scenic Dalmatian coast.

What’s summer without festivals? Zadar is most commonly known for its musical festivals, but there are numerous other cultural festivals throughout the summer.

Other popular festivals include art, theatre or the annual Full Moon Festival held in July. Gather your friends and head inland to immerse yourself in Zadar’s rich culture, food, and music.

The Zadar archipelago offers amazing landscapes of hundreds of tiny islands dotting the coast of the Adriatic Sea. The national parks are rich in biodiversity and natural wonders. 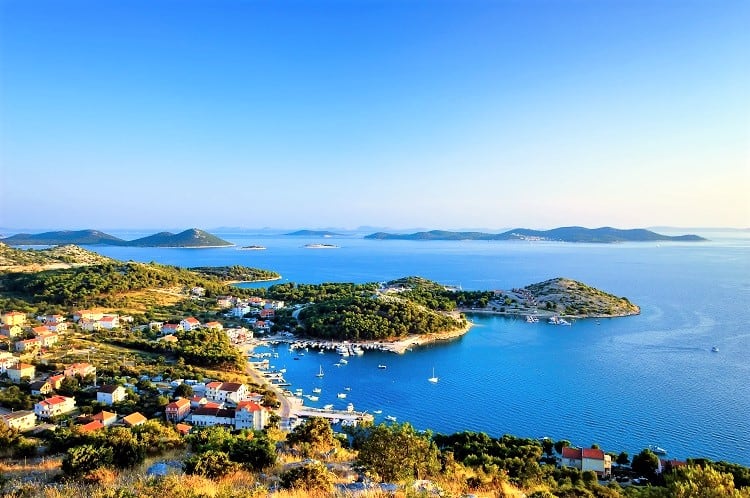 Approaching the islands by boat offers you an experience unlike any other. Many of the islands are uninhabited and in pristine condition.

The Mediterranean waters are calmest in the spring between April and June or late September into October. The weather during these months is still warm but not overbearingly hot; perfect for visiting the national parks or heading inland to wander around the radiant marble streets.

Zadar is one of the most beautiful and quiet areas of Croatia rich in historic landmarks and sandy beaches. Many of the outer islands can only be reached by boat. Charter a yacht or sailboat to explore this magical hidden gem off the Dalmatian coast. 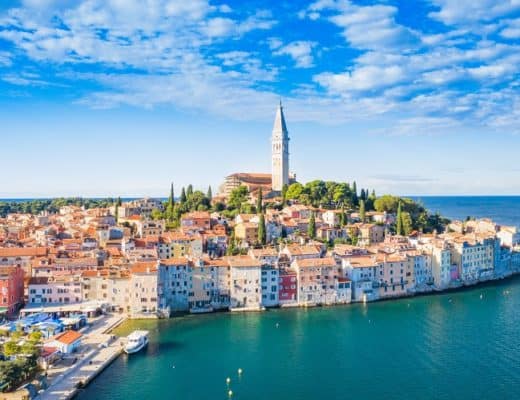 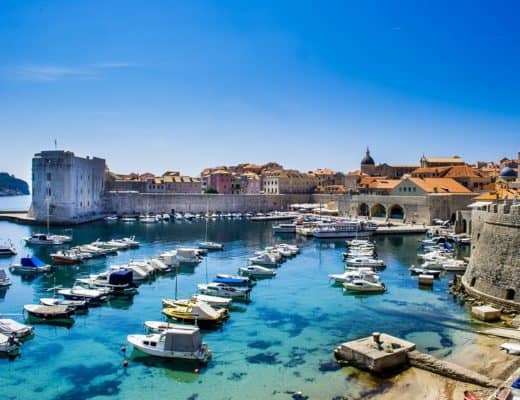 Why is Croatia and a Yacht a Perfect Combination for a Family Vacation?