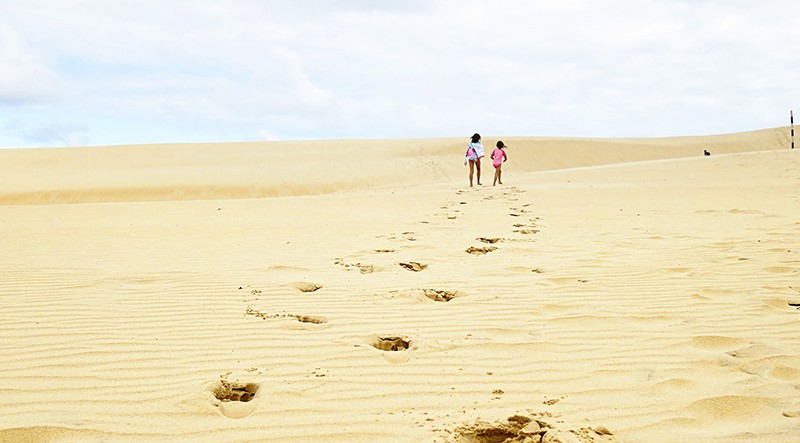 As soon as the wheels of our 4WD touched the sand, something inside us changed. Its like we were given a chance to see something, that not everyone can or has seen. We were given a chance to explore a different world. We have arrived to the largest sand island in the world, Fraser Island in beautiful Queensland.  And we were ready to explore all the Fraser Island attractions along the 75 Mile Beach! 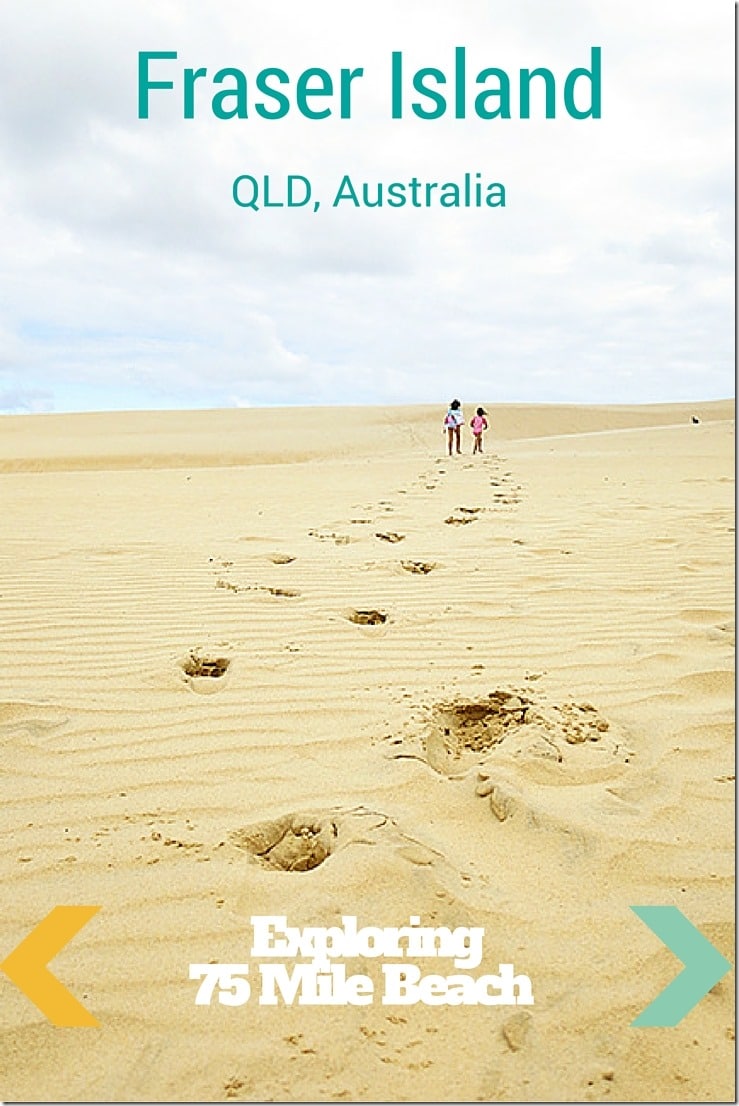 I have been to Fraser Island once before; when I was on a High School excursion; but I do not remember the 75 Mile Beach this way. When we reached the wide open beach stretching as far as the eye could see, I was instantly happier inside. Like something had been lifted from my shoulders. I think it was the stress of everyday life or something else, but it just didn’t matter. It was simply gone. It was just us and the most amazing few days of sight seeing lying ahead.  We couldn't wait to get stuck into our planner activities for our self-drive Fraser Island trip. 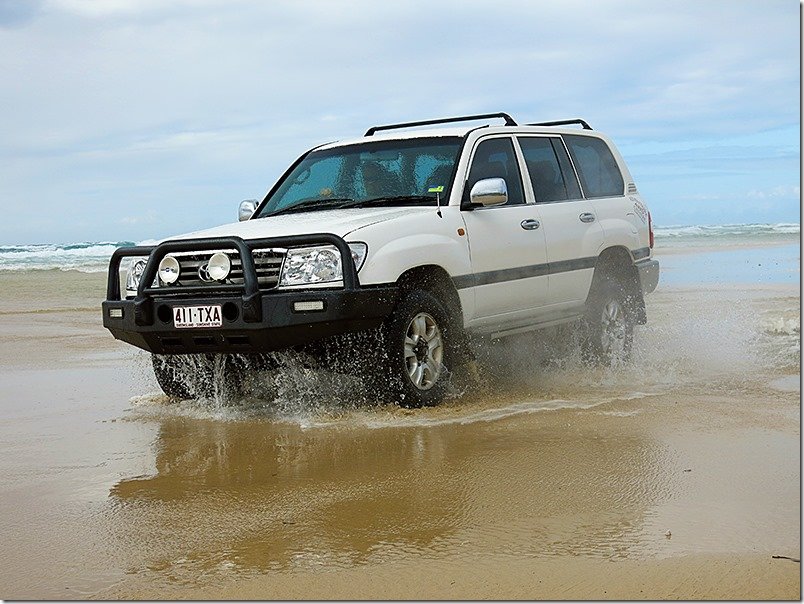 With our map in hand, prepared by our friend at the Rainbow Beach 4WD Adventure Centre, with helpful hints of what to see and when, we were on our way.  Our Fraser Island self drive itinerary and map had all the information we needed, including high and low tide times and how long it usually takes from point to point.  Having your own (or hired) 4wd on Fraser Island is a truly the best way to experience this magical island!

The speed limit here is 80km/h, but I think most of the time we were driving slower than that. There is simply so much to see here, that you can easily spend a good couple of days exploring. Did I mention that some sections of the beach pose as a landing strip for aeroplanes? You can go on a 20 minute scenic flight for only about $60.

We were very fortunate to see the famous Fraser Island residents, the dingoes. It was whelping season, so we did get to see 4 pups. The Fraser Island Dingoes are wild animals, so we decided to stay in our fourby, from where our kids could check them out safely!! 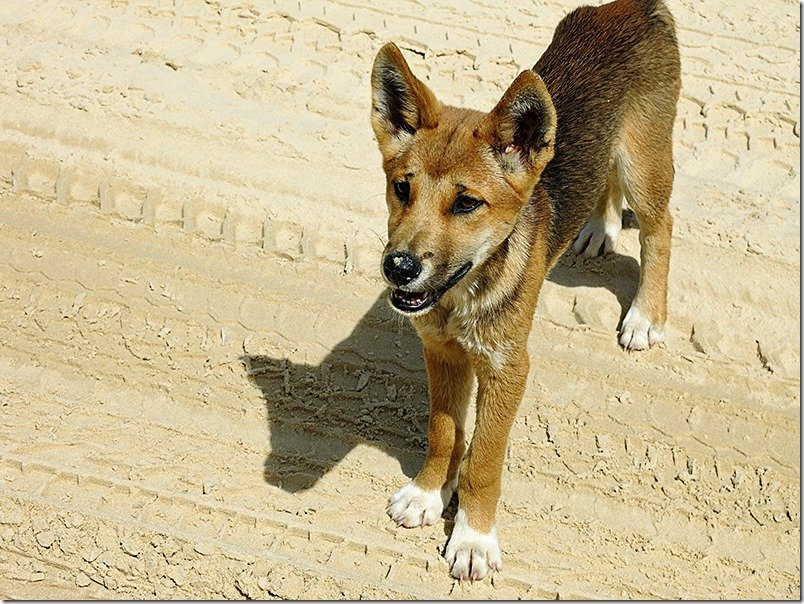 Ok, so let me take you to some of the awesome things we saw on our journey up the 75 Mile Beach Highway!!

Lake Wabby is located about 40km from Hook Point at the southern tip of the island. It is one of the closest lakes to the ocean on the eastern side of the island, unlike the other lakes to which you have to drive on the inland roads.  We parked our fourby close to the entrance, packed our bag with towels, sunscreen, water and even took a beach ball with, so our kids could play next to the lake.

The walk from the beach seemed a little long and took us about 40 minutes, I think. It did seem like forever to get there and passing people where saying 10 minutes more, few times haha. But it’s all good. Hike through the beautiful forest and a few steps here and there, and you find yourself in the sea of sand!! 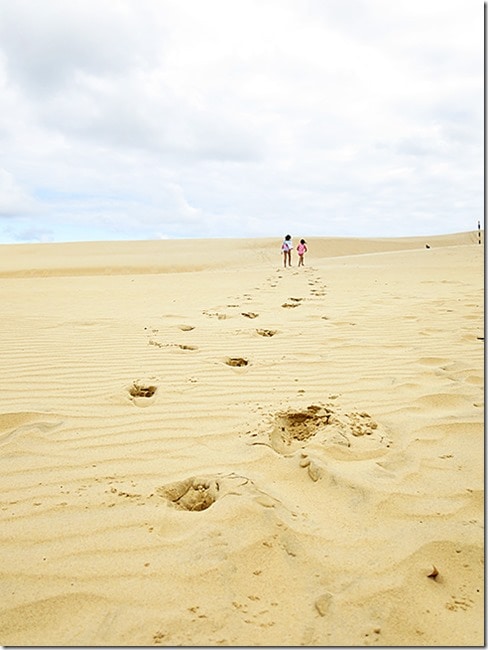 Yup, the giant of a sand dune bordering the lake is so huge, that you cannot see the lake at that point yet. Turning to the left and away from the ocean, you will still have a bit of a walk to go. Our beach ball decided to fly away in the wind, so our kids were running down the sand dunes chasing it like crazy. Needless to say, wind was a little bit faster than them, so the ball made it to the lake before everyone!! Quick tip: Do not take a beach ball with to the Lake Wabby!! haha.. 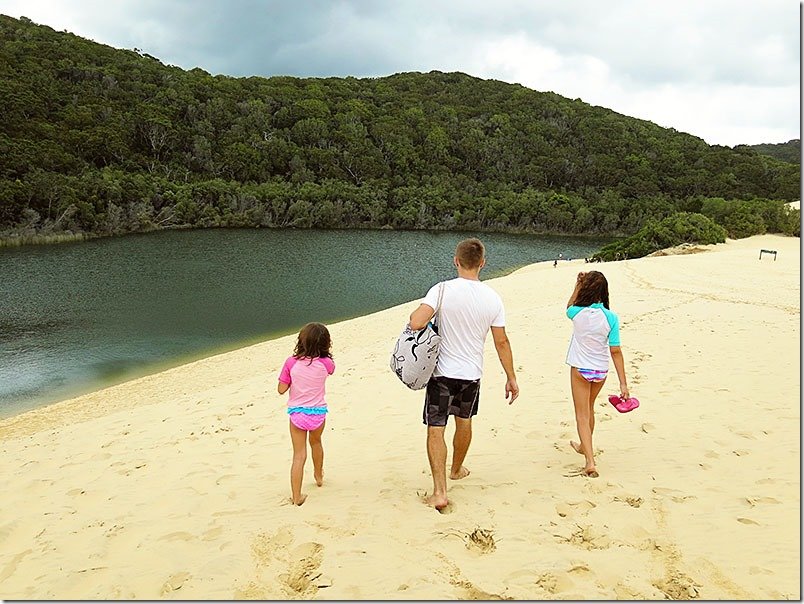 The lakes emerald green waters go as deep as 11.4 metres, making it’s the deepest lake on the island. It is a home to various species of catfish, rainbow fish and the very rare honey blue-eye. I did feel some little fish tickling my legs when I was swimming there, which felt a bit weird. Our kids didn’t mind at all. It is very steep here and it goes deep pretty quick, so look after your kids. I think at the point where we were playing, 2-3 metres in, I couldn’t feel the bottom. 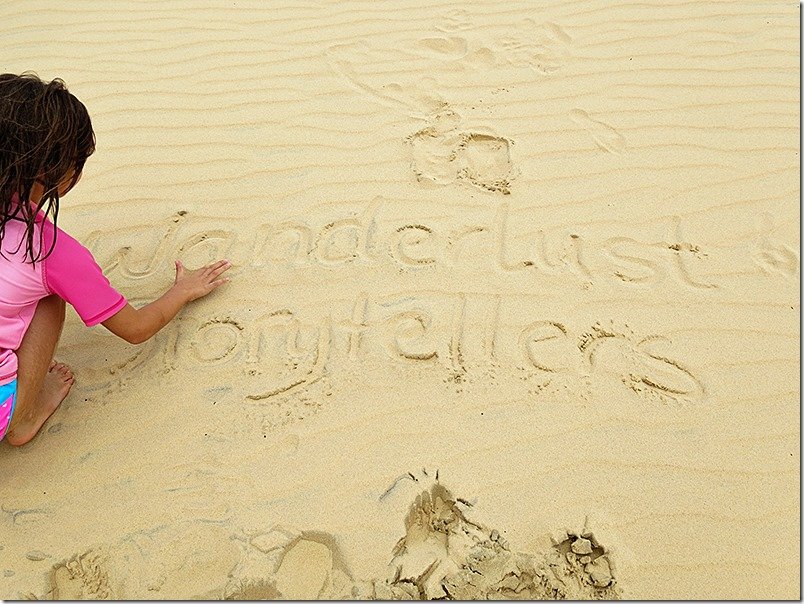 Very sad truth about the Lake Wabby is that probably within 100 years from now, this gem of Fraser Island will disappear. The famous Queensland Island is a sand island and it is forever evolving and changing. The spectacular giant of a sand dune will eventually swallow the lake, so please enjoy it while you still can.

Tip: If you are traveling with a baby or a toddler, you might want to check out which is the best travel toddler car seat here.

Eli Creek is the largest of the creeks on the eastern beach and it’s located 60.5km from the Hook Point. It is a very popular swimming and picnic spot, so make sure to spend a few hours here. Take a boogie board or a small blow-up pontoon for the kids. 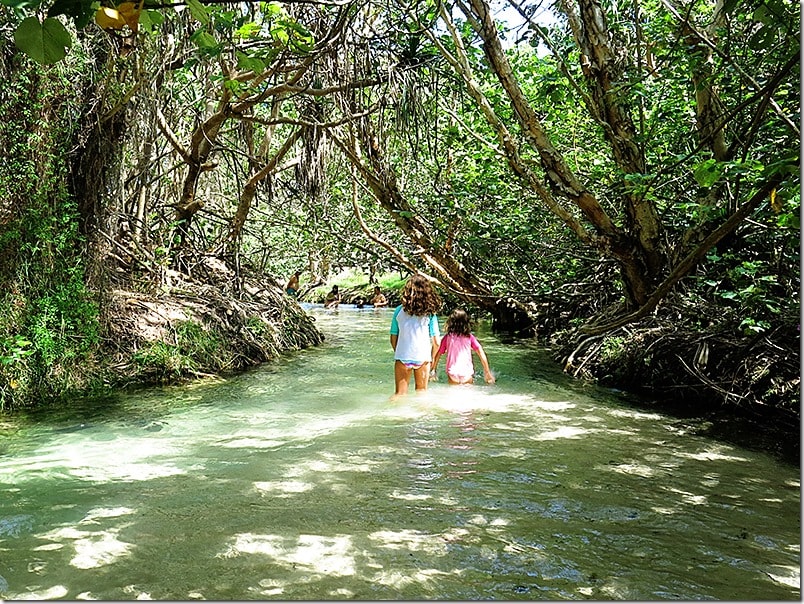 The creek pumps out up to 80 million of litres of water every day, which means millions of litres of water every hour. There is a board walk that takes you inland, only few minute walk, and it steps down into the creek at the end. Here you can simply sit or lay down on your board and float down the creek towards the ocean. Now that is fun!! You will find heaps of happy little faces here!! 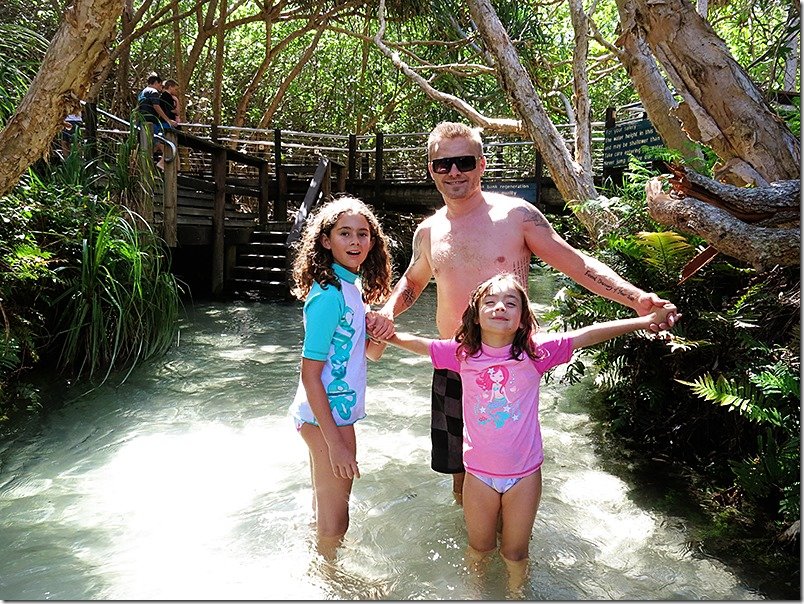 The water of Eli Creek takes up to 100 years to be filtered through the sand. Some theories are that some of the water supplying the creek may have been hidden from the outside elements for hundreds of years, which makes this water crystal clear, fresh and yes, icy cold!! Still, that does not worry anyone here. It is the most refreshing swim you will ever have, after the scorching Queensland sun. 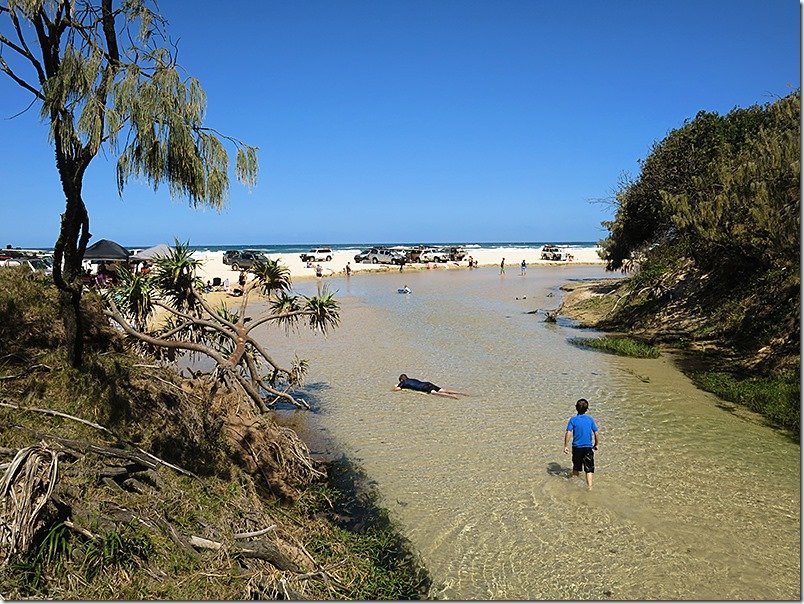 This shipwreck on Fraser Island is an incredible sight to see. After driving only a few minutes north from Eli Creek you will find a great piece of Australian History. Bound for Japan to be disassembled at the wrecking yard, this ship was struck by a cyclone. The Maheno found it’s resting place on shore of Fraser Island in 1935. 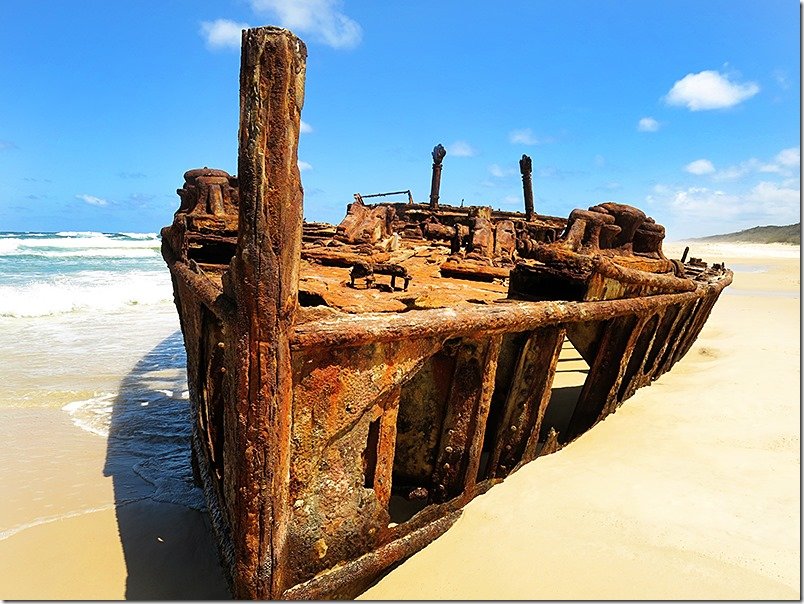 Nowadays the Maheno Shipwreck is a popular tourist attraction on Fraser Island. It is constantly attacked by the waves and slowly eaten away by the salty water. The rusty coloured wreck, shines in the sunlight against the turquoise ocean water and the golden sands. It is a truly picture perfect scene. 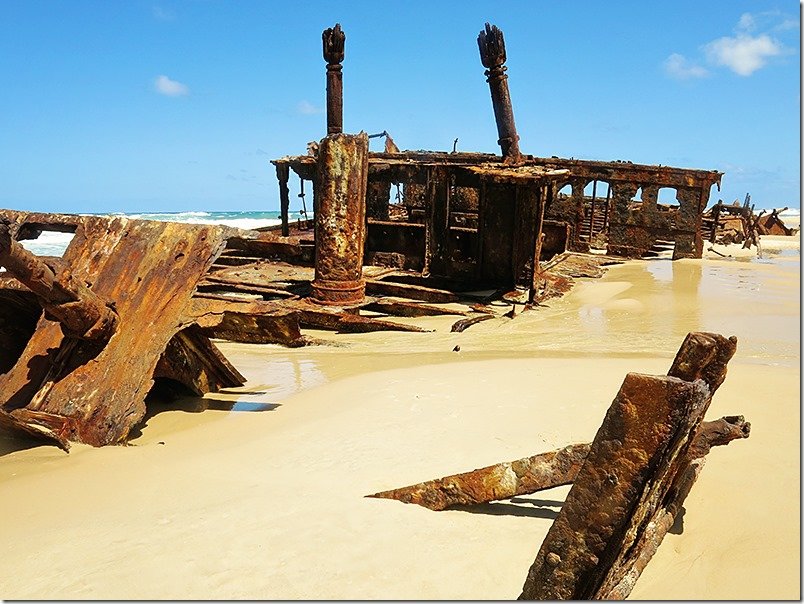 Due to the ships state of disarray, it is best to observe this wreck from a little distance and to keep the kids away from the crumbling state and sharp edges of the structure.

Few minutes north of Maheno wreck and 66.5km from the Hook Point, you will find the multi-coloured cliffs call the Pinnacles. It is a spectacular array of yellow, brown and red colours created by iron-rich minerals that have stained the sand into the most amazing display of light and dark tones over thousands of years. 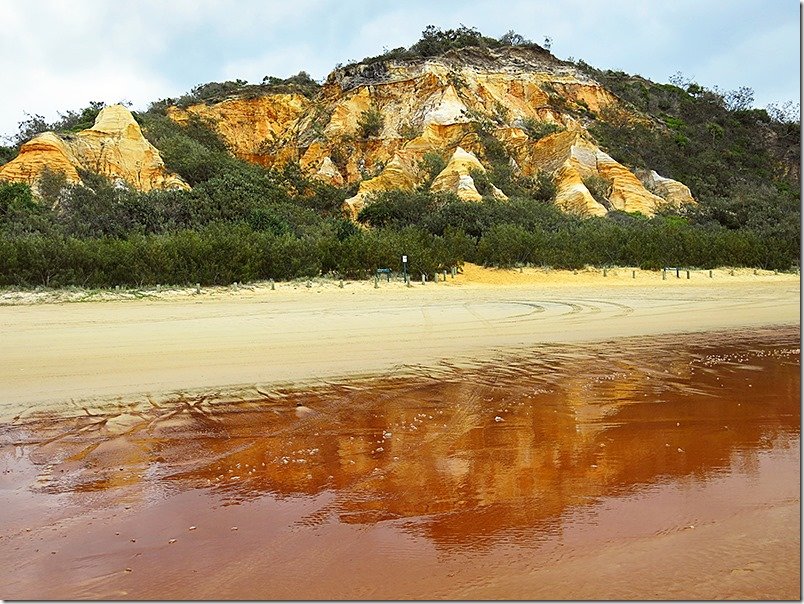 The Pinnacles are like sculptures designed and redesigned by the wind and rain, ever changing. With it’s vibrant play of colours creating a stunning backdrop for the many tourist stopping to take a photo or ten, haha.

This place is considered as sacred ground for the Butchulla women, who were the native tribe of the island. There is a tale of the creation of the Pinnacles and it goes like this:

There was a young woman called Wuru, who was promised to be married to an older man name Winyer. However she has fallen in love with Wiberigan, the Rainbow serpent.   One day Winyer followed the two and saw them at the beach. In his jealous rage Winyer threw his boomerang at Wuru, but Wiberigan protected her and was struck himself.  The Rainbow serpent shattered into thousand pieces, which fell on the earth colouring the cliffs.  Wuru escaped unharmed.  Ever since the Pinnacles colourful sands are known to be a place of good luck for the Butchulla women.

Indian Head is up the top end  of the amazing and full of adventures 75 Mile Beach. The spectacular views outstretch far into the ocean and to it’s surrounding beautiful beaches.

I thought that name came from the shape of the rock. As you drive towards it on the eastern beach, it kinda looks like the shape of a native American Indian chief’s headwear, but I was wrong. Indian Head was named by Captain James Cook in 1770 after he spotted the Butchulla people around that area. Back then apparently the term “Indian” meant ‘native’. 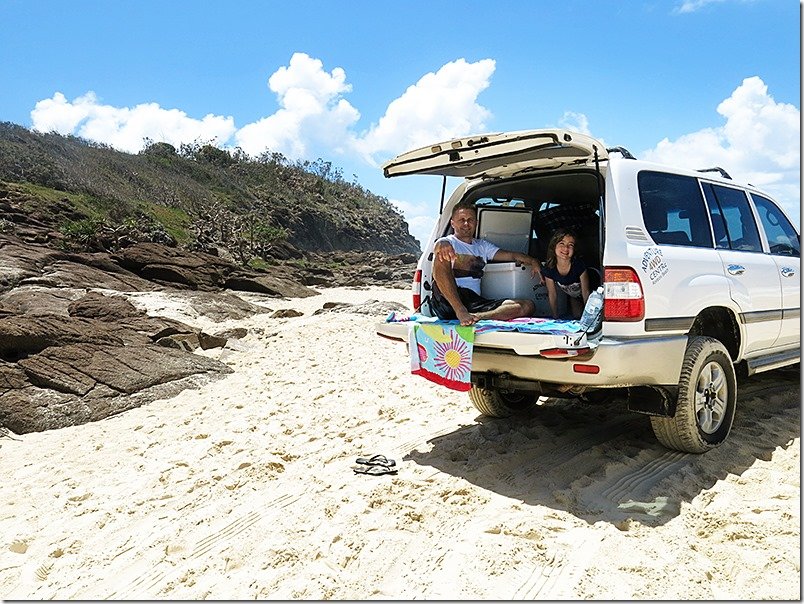 Indian Head is one of only three rock formations on the Fraser Island. It is said that it took some 50 to 80 million years for the island to develop. The rocks provided the anchor points for the sand to settle behind, forming the magnificent and one of a kind sand island. So, when you stand atop this rock, think back.. if not for its position, there probably wouldn’t be a 75 Mile Beach. Pretty important place then!! 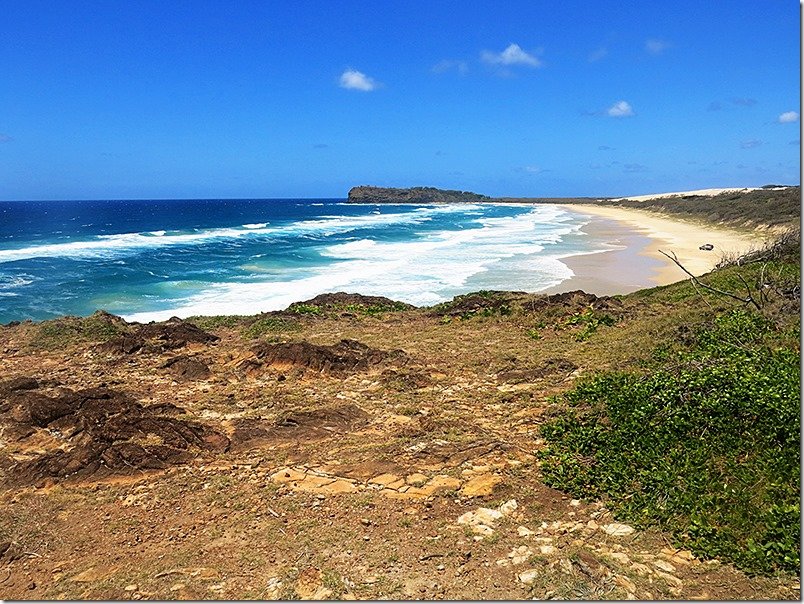 The rock is a an awesome place to stretch your legs and go for a walk along the boardwalk. Take your camera!! During season you can spot Humpback whales passing the Fraser Island and all other Queensland marine life, like dolphins, turtles and sharks.

Just a short walk or a quick drive north from Indian Head, you will find the most famous salt water swimming spot on the Fraser Island, Champagne Pools. Named as such because when the waves settles back after crashing over the rocks surrounding the shallow sandy pools and you are left with a foam of bubbles covering the water. This phenomenon gives you a feeling of being in the giant Jacuzzi, where you can float around and relax. 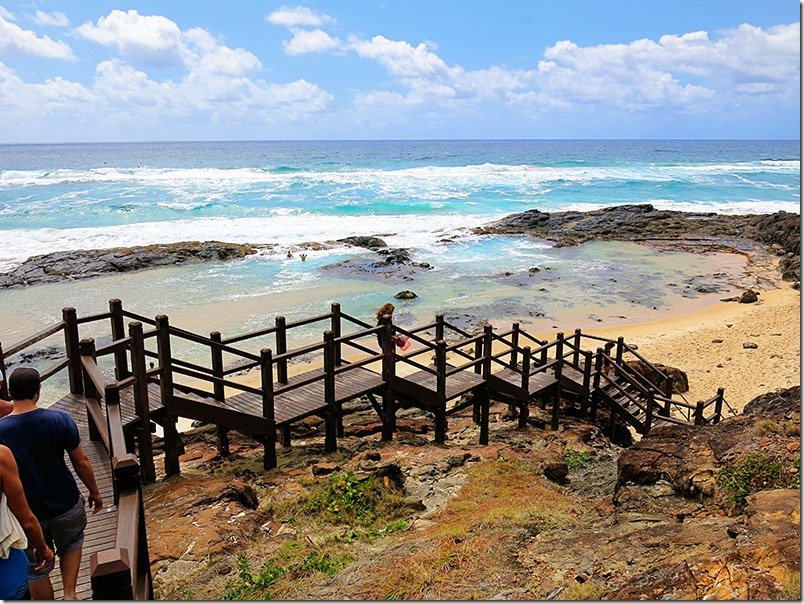 We spent couple of hours here, lazing around the soft sandy beach, watching kids build sand castles and absorbing the surroundings. Little rocky cove protecting us from the wind, creating a truly cosy place to chill out!! It is a very cool way to finish off the day before getting back down the Seventy Five Mile beach Highway. 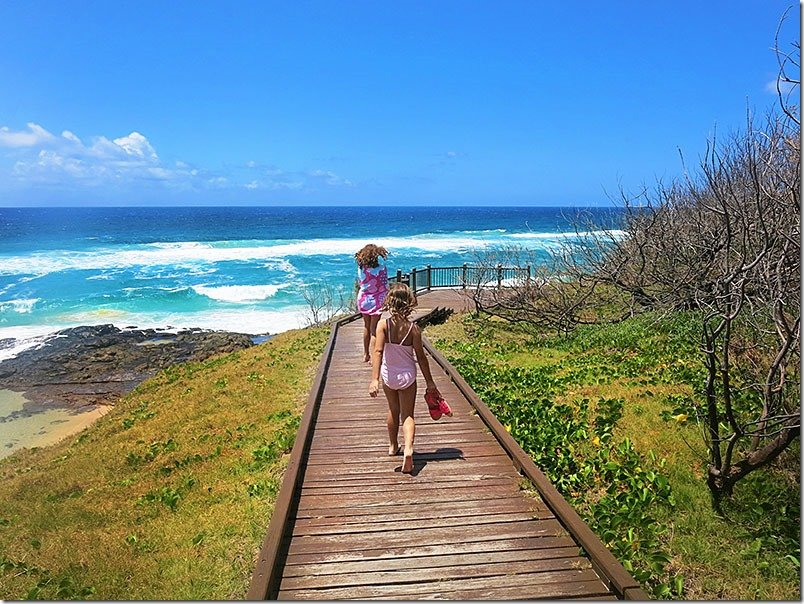 When you are in Queensland, are you going to check out Fraser Island?

Which of the Fraser Island attractions would you like to see on the 75 Mile Beach?

For more posts on Fraser Island, see below: 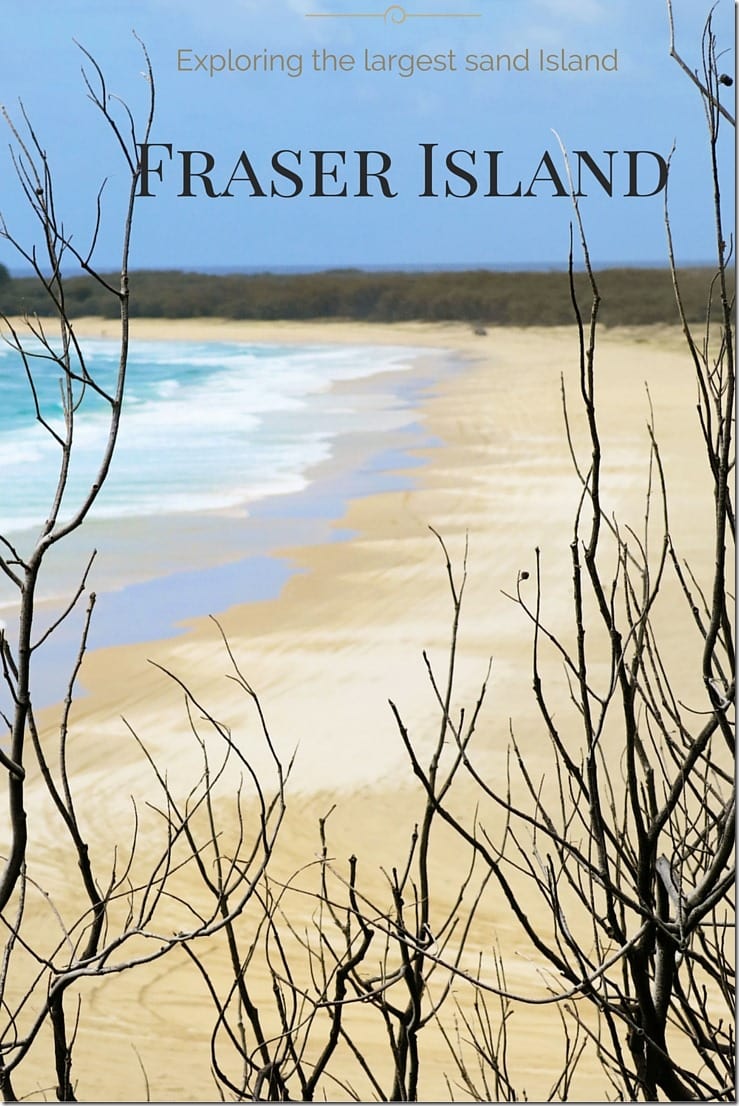 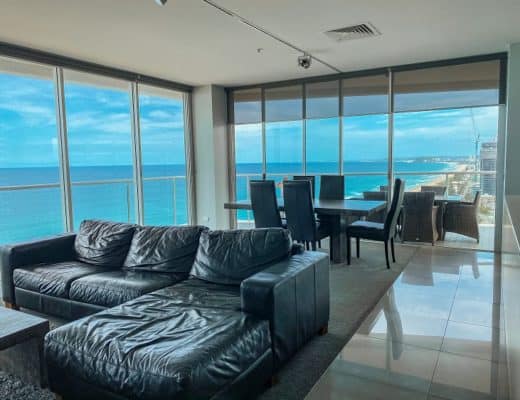 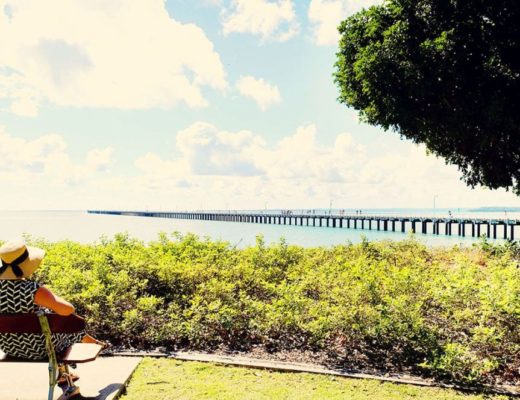 11 Awesome Things to do in Hervey Bay, Queensland 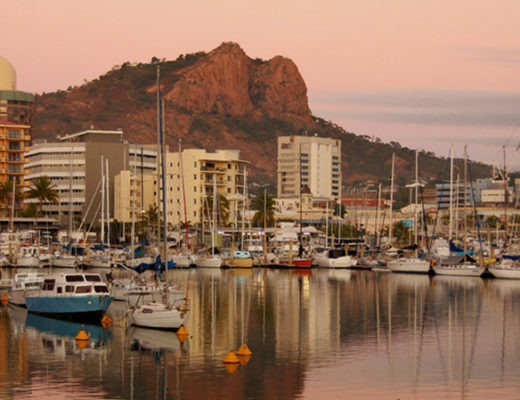